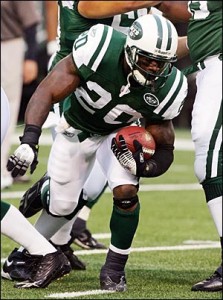 As the free agency period gets ready to begin on Friday, Mike Tannenbaum, general manager for the Jets, said that he informed Jones of the team’s decision and the reasons for it.

“Thomas joined us three years ago and has been a productive, passionate leader both on and off the field who has served as a positive influence for our younger players,” Tannenbaum remarked on NJ.com. “We were fortunate to acquire Thomas and wish him the best.”

This upcoming season, Thomas was to make $2.8 million, and additionally, was owed a roaster bonus of $3 million.  After failed attempts to come to terms on a new deal in which the organization wanted to pay less money, Thomas’ tenure with the Jets has come to a close.  Other teams like Cleveland or Minnesota would be willing to pay Jones his salary.

Jones tried to negotiate a new deal last off-season as well, as the running back made only $900,000 in base salary for the 2009-10 season.  He rushed for a career-high 1,402 yards and 14 touchdowns for the Jets.  New York led the entire league in rush-yards per game.  He was a cornerstone piece which spearheaded the Jets all the way to the AFC Championship game.  A cornerstone piece that will be very hard to replace.

The news of Jones release does not sit well with his teammates.  Two separate occasions, he was elected as the “team’s most inspirational player” ESPN.com reports.

“When I got here, Thomas immediately became one of my guys,” Jet head coach Ryan remarked of Jones. “He had one of his best years last season, might have been his best. I have a tremendous amount of respect for him as a player and a person. This is one of the tough decisions we had to make for our organization.”

With the break-up of the two parties, the Jets will rely on Shonn Greene, who was a rookie last year out of Iowa.  Greene saw significant playing time towards the end of the season and on into the playoffs.  But will he be able to pick up where Thomas Jones left off?

While at 32, Jones has continued to produce since being acquired from the Chicago Bears.  Two seasons ago, Jones led the AFC in rushing, and this past season he finished third.  At his age, many feel that at his position of running back players begin to break down.  This is a stereotype that Jones wants no part of.

“Whoever came up with that rule obviously didn’t play running back in this league, didn’t prepare like I prepare, didn’t watch film like I watch film, didn’t take care of their body like I take care of my body,” Jones remarked during last season. “Physically, I feel like a rookie” he told ESPN.com.

Jones is renowned for his workout routine and work ethic, keeping himself in the best shape that he can.  Until his fifth season in the league, Jones never had more than 140 carries.  To put that in perspective, he had over 330 this season.